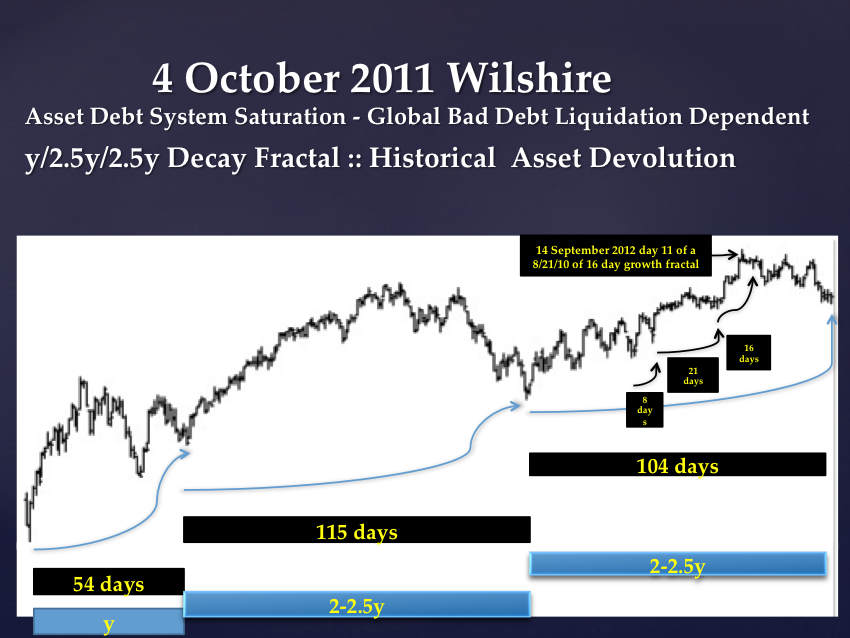 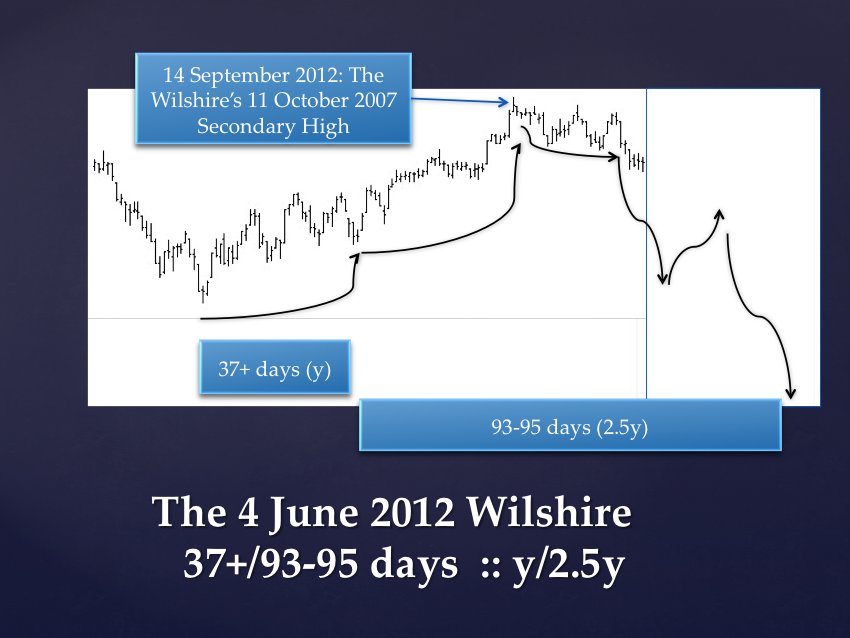 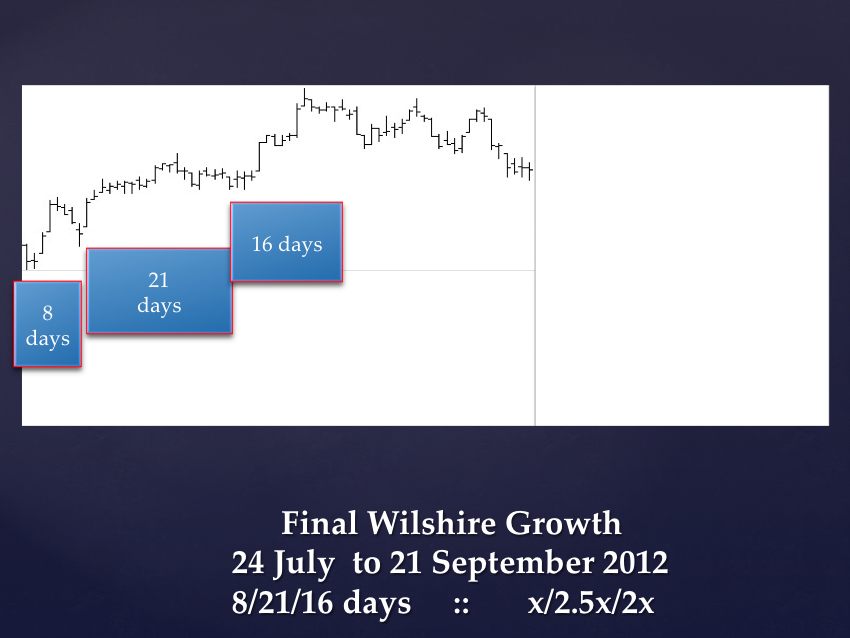 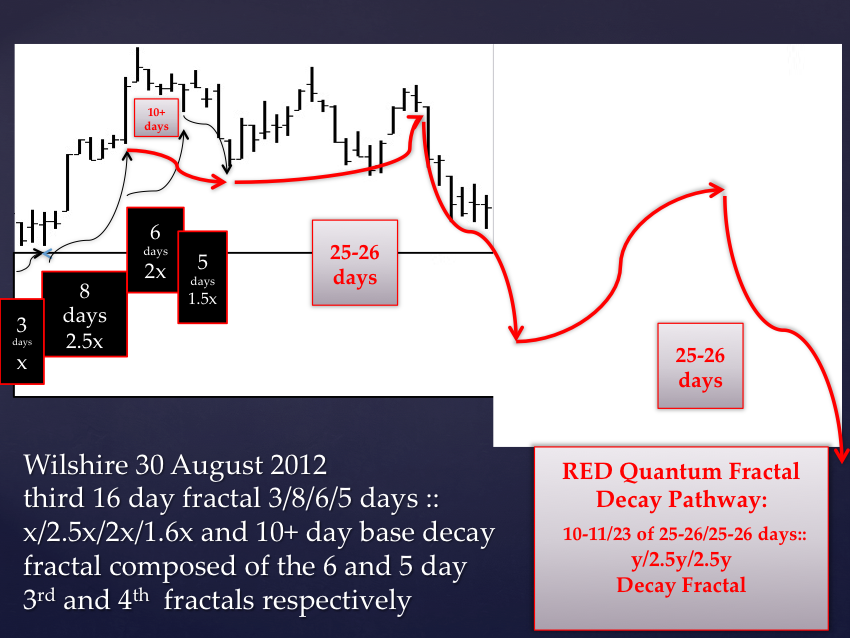 Global Debt which cannot be repaid on the the basis of new demand and related jobs in an asset over-produced  and over-valued  saturated macroeconomy – will inevitably undergo default.

The asset debt macroeconomic system made its  transitional peak valuation day on 14 September 2012, the Wilshire’s secondary peak to its nominal high on 11 October 2007.

The Wilshire’s secondary high on 14 September 2012 was supported by competing US sovereign Ten Year Notes 280 basis point below those associated with the 11 October 2007 nominal high.

The Wilshire, representing only 15 trillion of the  Global Asset Debt Macroeconomy’s   1000 trillion total wealth is an accurate proxy for the Total System in terms of directional asset valuation growth or directional asset decay.

Intuitively, continuous growth in valuation of Hegemonic US Sovereign Debt (lower and lower trending interest rates and higher and higher trending valuations for US held bonds and US debt futures) is a natural occurrence  as the Asset-Debt System’s total  bad debt load becomes greater and greater.

This bad debt load which will not be repaid has been previously borrowed and spent in over producing assets such as real estate and causing overvaluation of existing assets. As well the facilitated creation of bad debt temporarily produces more demand and  wage earners than the system would produce if more prudent 1930’s global rules were in place with regards to debt creation and speculation.

The system is inherently unstable because it is the primary business of the  international  Financial Industry to compete with each other for the population of debtors and to accumulate the maximum number and market share  of counter party borrowers.

As the bad debt load of the system increases over time, Hegemonic US Sovereign Held  Debt, which carries a 100 percent guarantee of repayment, increases in value with lower and  lower interest rates

This is the end of a great US bad debt credit cycle starting in 1858. The time dependent evolution of the  asset-debt system’s asset valuations are dependent in part upon the presumed value of the underlying bad debt load. Eventually with a slowing real economy and fewer wage dollars to support the bad debt load,   incipient net default occurs where net credit expansion slows, reaches a critical zero velocity level, and thereafter contracts in an accelerating nonlinear fashion.

While this growing level of default of bad debt is either not accurately measurable or is  but not well reported, the system’s proxy’s marker’s such as the world equities composite values, CRB,  XAU, and TNX provide the integrated asset debt system’s summary data in the daily valuation band valuations and more exactly in their deterministic quantum self assembly fractal growth and decay patterns over their daily, weekly, and monthly self-assembly evolving fractal patterns.

These predictable growth and decay patterns afford the asset-debt macroeconomic system the qualities of a hard science. Perhaps fractal growth and decay is the nature of harmonic self assembly energy elements within the apparent void that is the observable physical universe.

During asset-debt system collapsed based on default of bad debt,  the use of sovereign currency, directly traded for essential sovereign work and useful projects, is absolutely essential to moderate the consequence of collapse on the lives of the sovereign’s citizens.  Use of sovereign currency directly traded for the sovereign’s citizen’s useful work has the exact effect of credit creation of good debt, i.e., that which will be circulated in the system and that which will be repaid.

Use of the sovereign’s currency traded for services  offsets massive deflation and replaces a part of the massively vanishing  bad credit and moderates the pathway of resultant debt-asset system’s asset devaluations.

14 September 2012 was the Wilshire’s secondary valuation high to its 11 October 2007 predicted nominal high. 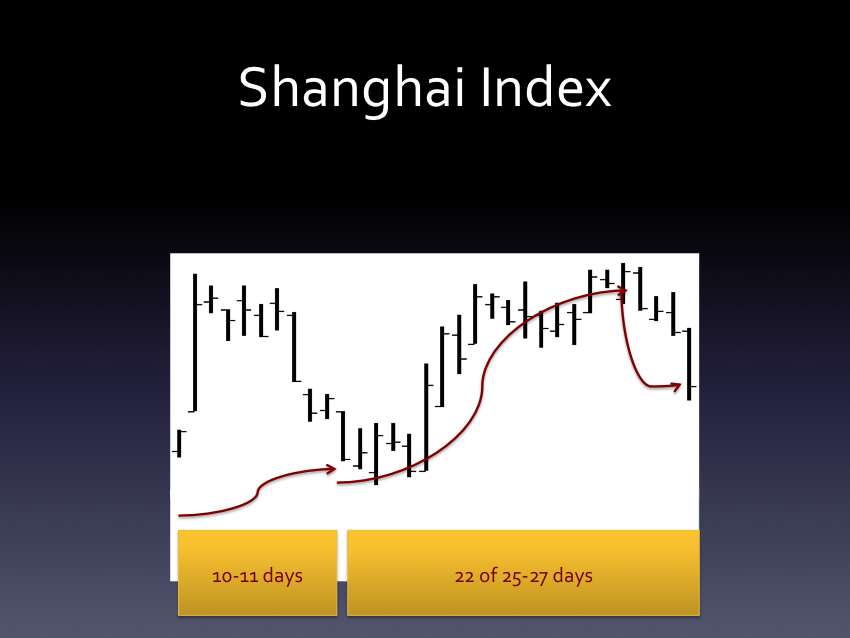 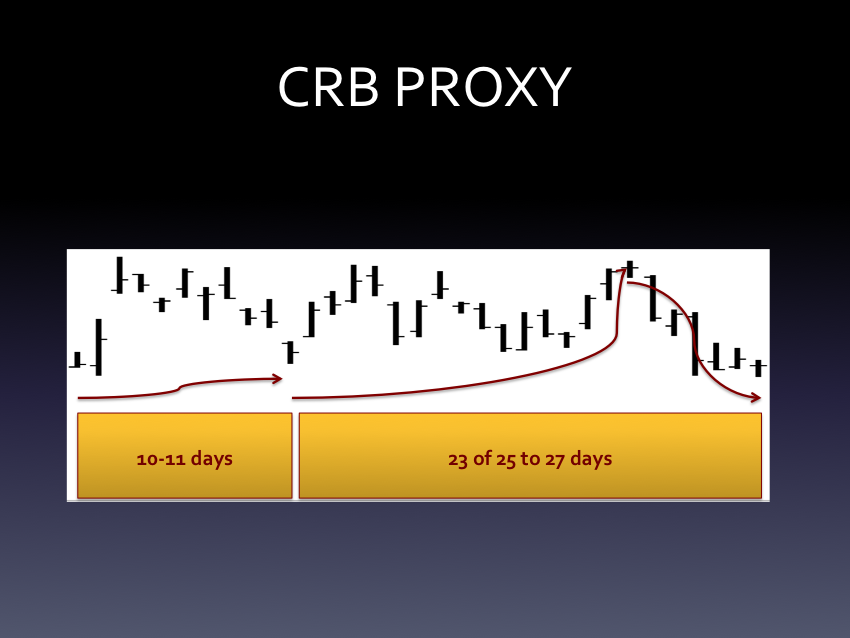 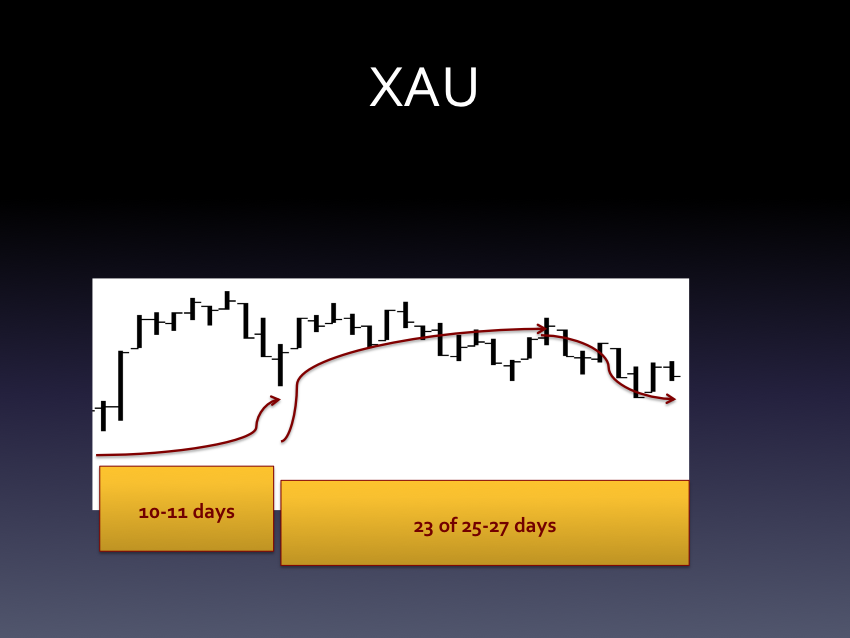 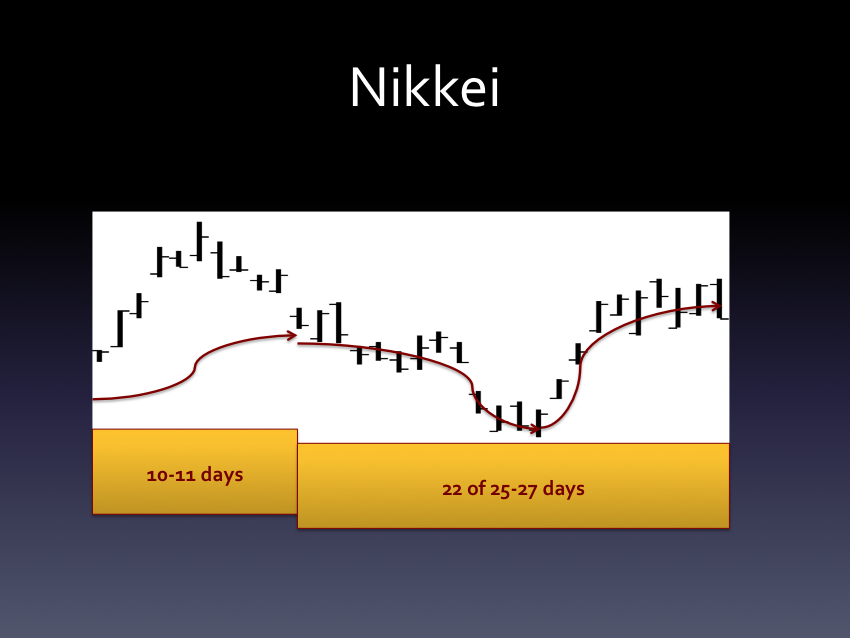 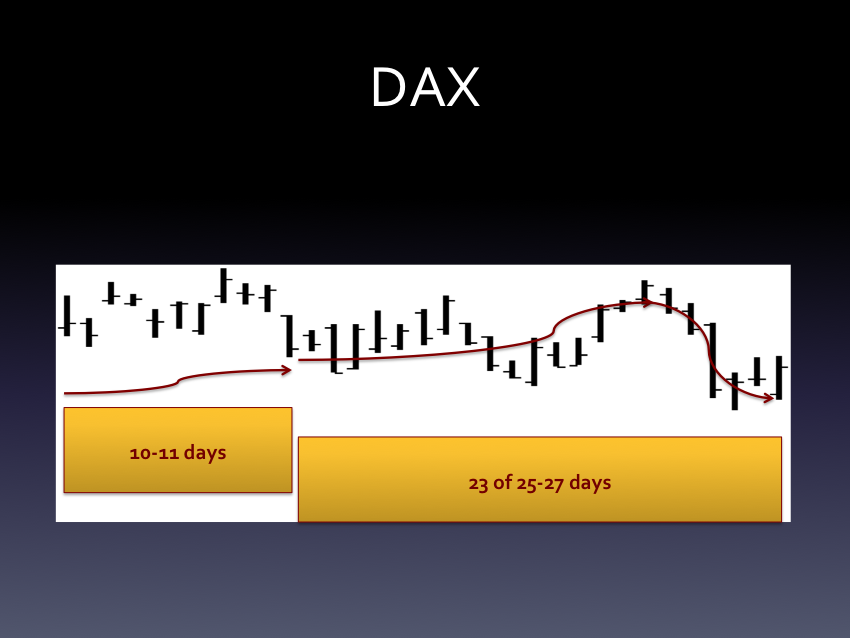 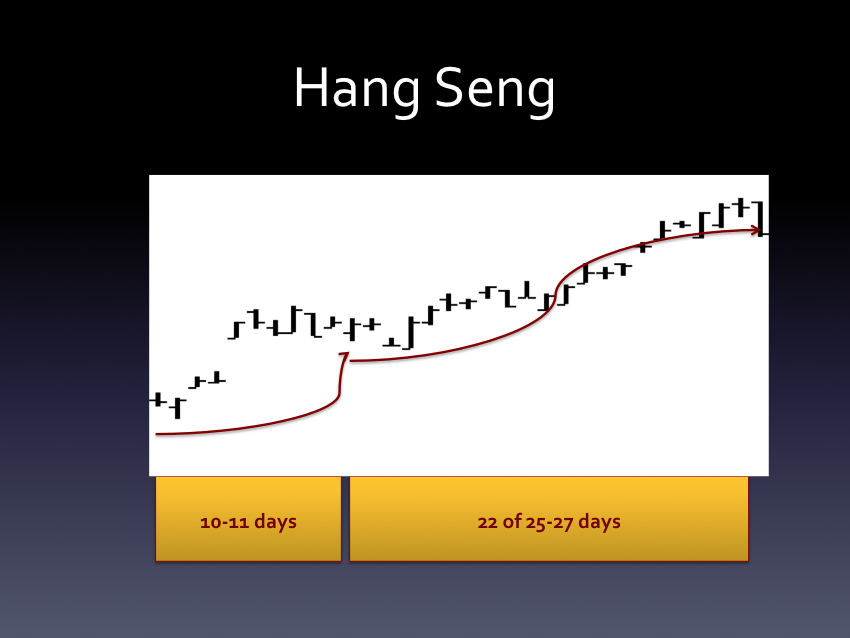 Lammert Saturation Quantum Fractals….  at the nonlinear  terminus of a US 1858 155 year equity continuum Second Fractal …. 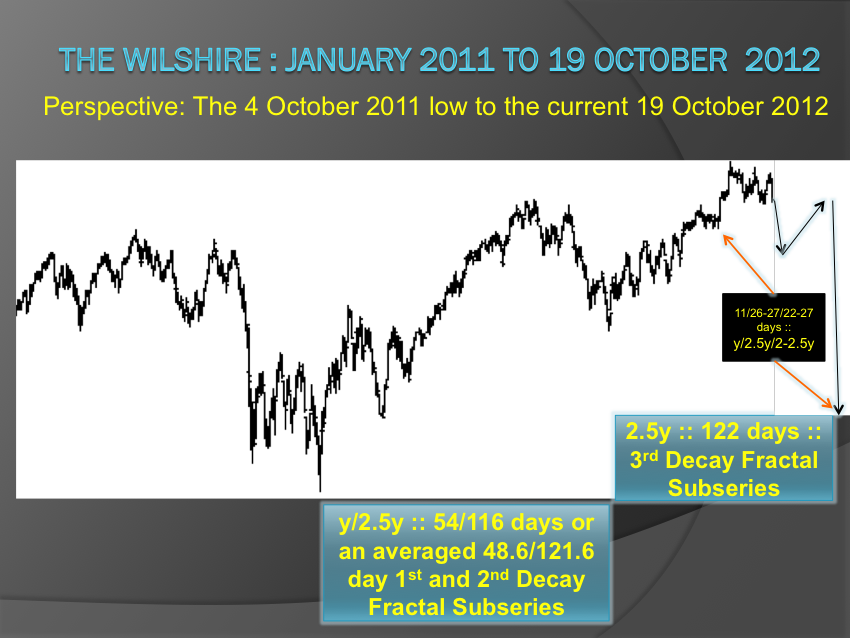 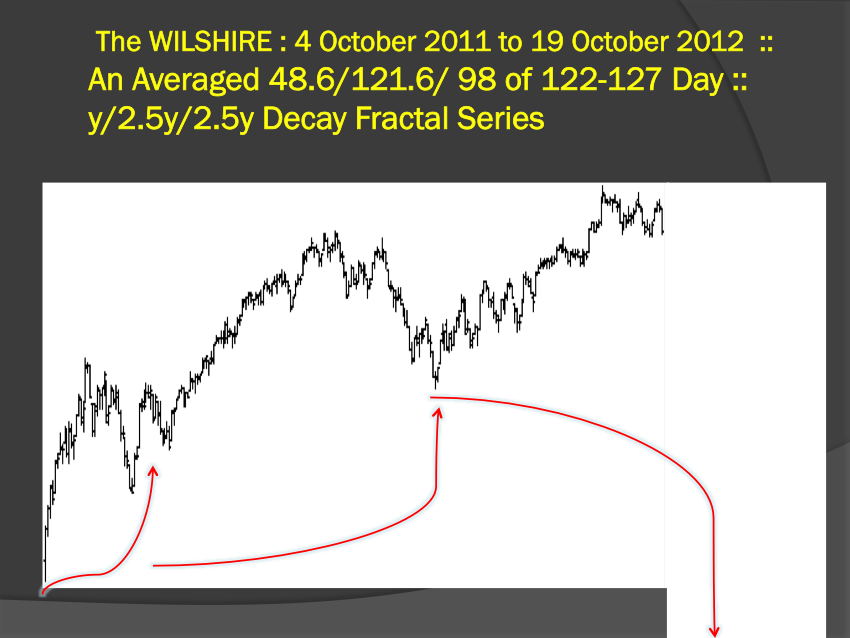 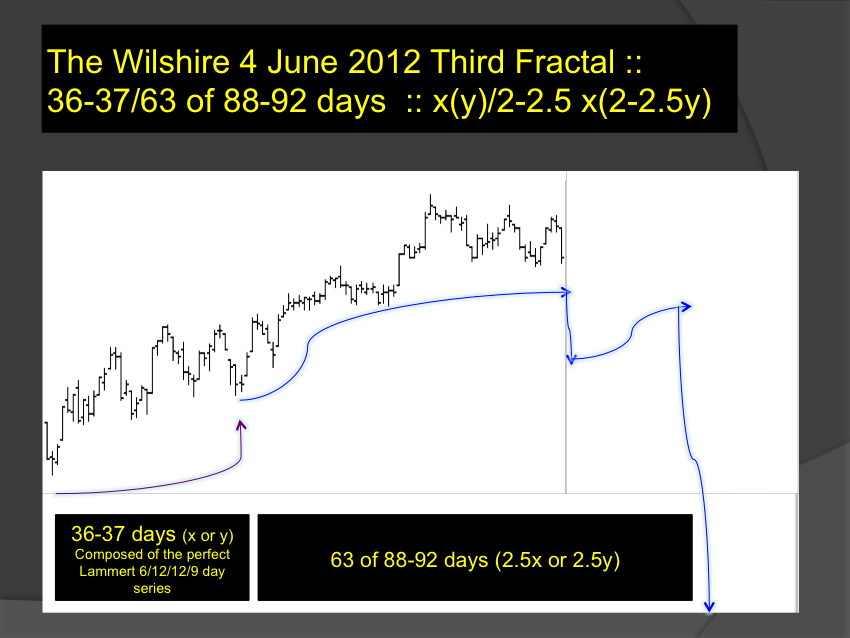 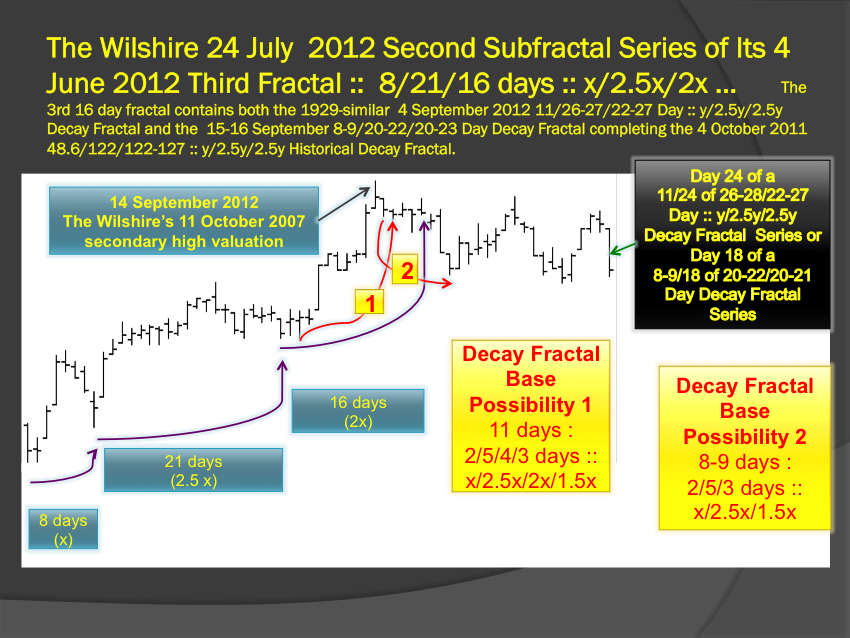 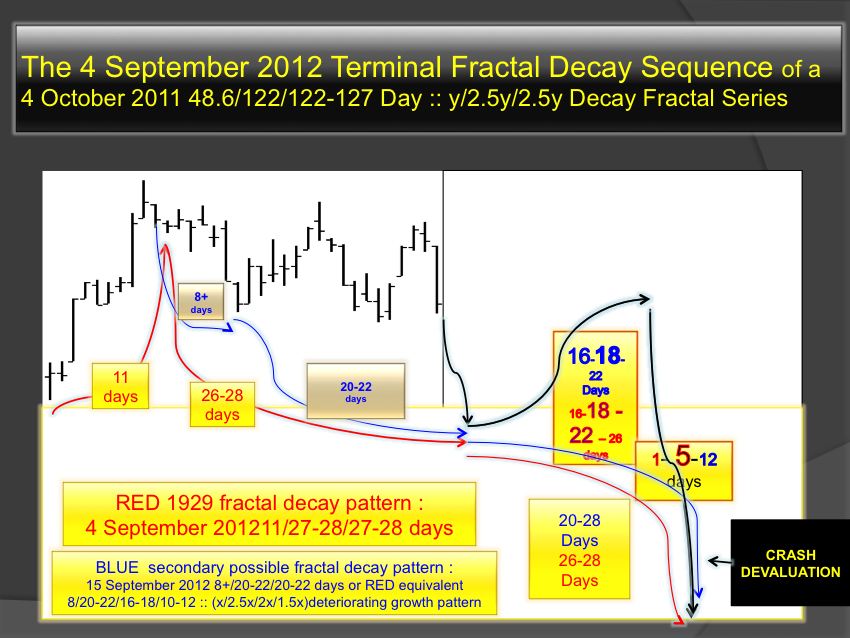 During the underlying bad debt exponential default US Sovereign Long Term Debt  Futures are in a blow-off mode with long term interest rates headed to substantially less than one percent.

Who facilitated the creation of the easy credit and population  bad debt saturation,  asset overproduction and asset overvaluation?

The SuperRich who hold the bulk of Global Equities and US and other Sovereign debt instruments have molded the  monetary and debt system through paid-for political control, resulting favorable legislation, and the gaming of existing tax and legal loopholes over the last 100 years to advantage themselves – particularly at the expense of the traditional real economy and wage earner.

The growing ‘business’ of the money changer hedge funds  with their Nobel Laureates Gamers have circumvented established rules using gaming loopholes and the unregulated dark areas of derivative and paper/electronic asset exchange.

The real economy is now dominated by this money changing and churning  of the Elite  Financial Equity and Commodity Gaming and Debt Industry. The boom bust cycles especially since the 1998 LTCM central bank orchestrated bail-out has created a de facto coup d’etat of the real economy by the Financial  Debt Industry and Superrich.

The Financial industry manages the US debt and has  ownership and primary first use of the Sovereign’s money.

At the height of the 2008 debacle the US Debt Industry owed more than 17 trillion dollars – more than all of the US  citizen’s household debt, more than  all of corporate debt, and nearly twice as much as the then existing US federal government net debt.

Borrowed money was used to leverage  the system’s real estate, equity, and commodity asset valuations, scamming  money during both the boom valuations and subsequent bust devaluation.

The plurality business of America is now the maintenance and increased accumulation of the wealth of the entitled rich through their legislated facilitated and favored money borrowing, lending, and asset churning trading activity and through first ownership use of low interest money trading and leverage activity.

With the Financial Debt Industry’s firm control of both political parties .. one thing is relatively certain – more and more of the same with increasing peripheralization of the traditional economy where actual labor and service is traded for other like real elements in the economy through a medium of work-based currency and augmented by reasonable borrowing  from traditional banking sources paying a  reasonable interest on savings and making profits on a reasonable lending rate.

During the coming  collapse, the Financial Industry will emerge ever more wealthy and, with their owned politicians,  paying an  ever lower tax rate on their money changer ‘investment’ gains – worth intrinsically more by the established legislative gaming rules – more than citizen derived work equivalent  gains.