Does the knowable universe self assemble to a maximum entropy/low energy/ low temperature/dimensional spacetime  ‘growth valuation’ state and thereafter again nonlinearly collapse into a singularity  – the universe transitioning as  a cyclical growth and decay pattern?

The asset valuations of the asset-debt macroeconomic system, a subset of that energy- space-time universe,  observably does just that.

The US current hegemonic Asset Debt Macroeconomic system began with an initiating fractal series of 18 years in 1790 formalized by the New York Buttonwood agreement in 1792 and ending in the panic of 1807.

The Louisiana purchase and credit expansion after the panic of 1807 provided the substrate for land speculation. This speculation ended with the  peak valuation collapse with the panic of 1837  and ended with a nadir of commodity and equity equivalent  valuations in 1842. This represented   a 36 year 1A  fractal sub-series from 1807 to 1842.  The  1B fractal sub-series ended in the panic of 1873, fueled by US railroad expansion and international investment with a nadir of commodity and equity valuations in 1877 for the second fractal sub-series also with a length of  36  years.  The total length of the  US Great First Fractal series from 1807 to 1877 spanned 71 years. (The first and the last year are counted in the fractal series)

The 2A fractal sub-series from 1877 to 1932 was characterized by peak valuation in the  late 1920’s and was fueled by World War 1 and in late 1920’s by personal credit expansion by manufacturing companies  for automobiles and appliances and by marginal buying of equities.

The 2BA fractal sub-series from 1932 to 1982 was fueled by credit expansion and work projects from the1930’s  depression era,  massive deficit spending during World War 2 and the Marshall plan and Cold War deficit spending.

The  drivers for debt credit expansion for the 2BB 1982 to 2021 40 year fractal series has been  provided  by multiple vehicles.: 1.  steadily cascading falling US long term interest rates with high rates in 1982 established by Chairman Volcker to combat inflation; 2. american CEO lobbied  NAFTA and Asian trade agreements  to use ultra cheap then third world labor to maximize American company CEO profits.  Credit was provided by those countries  and represented  trillion of  dollars of American trade deficits.; 3   debt financial engineering using collateralized debt tranches, and fradulent valuation and credit worthiness assessments 4 expansion of the federal deficit as a percentage of GDP with  money creation ex nihilo; 5 exploding corporate debt with sustaining of zombie companies by relatively low  interest rate borrowing and further CDO creation.  Overvaluation bubbles occurred in a series of peak valuations for a series of asset classes; the internet and cable industry in 2000, the global real estate bubble in 2008, the global debt bubble in 2019 with negative Sovereign European long term interest rates, and the  current tech and Tesla bubble, the latter with a PE ratio of greater than 1700.

The final 2BB3 fractal subseries of 13 years  starting in March 2009 of the 1982 second subfractal series is also composed of a three  fractal sub-series: 2BB3a 2BB3b. and 2BB3c

This will end an 1877  145 year US hegemonic Great Second Fractal with an 80-90 percent expected collapse of global equity and commodity prices including gold in US dollars and Bitcoin in US dollars over the next 10 trading days.

During the next 10 trading  day equivalents,  equity and commodity valuations will collapse and the US dollar against other currencies will briefly greatly appreciate, serving as the temporary vehicle for the purchase of temporarily depressed global equity and commodity prices.

During the Third US Great Fractal  beginning in February 2021, negative interest bearing 30 year US bonds will result in hyperinflation of  all asset classes. Self assembly growth of asset valuation swill be highly ordered and occur to the simple ordered patterns and simple scientific fractal laws of the Asset-Debt Saturation Macroeconomic system.

As Deutsche Bank goes, so goes Global Equity indices and the CRB. 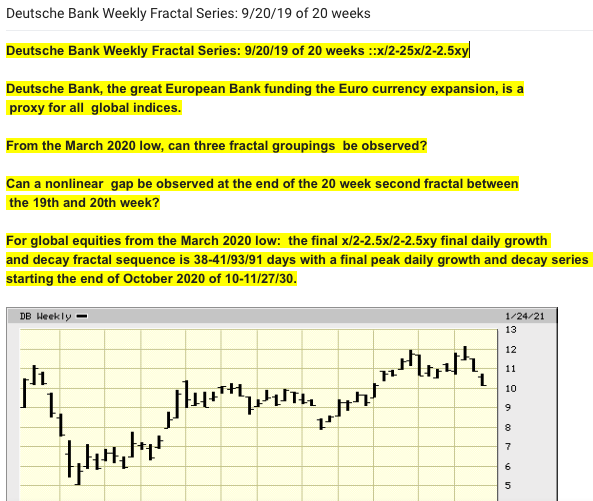 It is goal of this website to recognize that the asset debt macroeconomic system is a deterministic and  patterned science.

The growth and decay of these asset valuations to maximum high and low valuation are dependent upon prevailing interest rates.

US interest rates since 1982, the start of the 1932 second subfractal series and composed of  9/20/13 year (x/2-2.5x/1.5x) concluding fractal series have progressively fallen with steadily higher valuations of asset classes, but with easily observable intermittent falls in valuations.

With a growing US national and international sovereign debt and growing social contract obligations, lower and lower interest rates are, perforce, needed to sustain the system, which cannot repay the debt load.

The rise and fall in the valuations of asset classes  including debt to maximum highs and lows are  deterministic and are self-organizing into regular hourly, daily, weekly, monthly, and yearly fractal patterns.

This regular patterned periodicity in simple well-defined mathematical fractals  confers on the asset-debt macroeconomic system the properties of a science.

The 145 year US hegemonic second fractal  starting in 1877 with a base of 71 years which started in 1807 is expected to end with a spectacular nonlinear collapse in valuations of commodity, cryptocurrency, and equity valuations.

All sovereign equity indices’s valuations  are linked to each other via the existing sovereign, corporate, and individual debt interest rate parameters and debt load.

For Bitcoin represented by GBTC the final fractal progression is:

For global equity indices, the French CAC index,  starting from the low at the end of  October  2020  to its peak valuation,  provides a representative example of  classical Lammert fractal self assembly to normal maximum (2x vice 2.5x third fractal )growth:

Notice the  obvious nonlinear drop between the 26th and 27th  dayof the 27 day  second fractal (as described  as the hallmark of the terminal portion of second fractals in the 2005 main page of this web site).

The growth to peak valuation will be transformed into a x/2.5x/2.5xy combined growth and decay fractal collapse. Expected   from the end of the October 2020 low valuation is a 11/27/28 days fractal. With 9 trading hours defining a trading day for the French  CAC; the final hourly nonlinear collapse fractal series starting on 15 January 2021 is predicted to be 19/38/38 hours .

Again it is goal of this website to recognize that the asset debt system is deterministic and a patterned science.

Growth of asset valuation in the follow-on 2021 US-Euro-Asian 100 plus  year Third Fractal starting 2021 will be determined by negative US and European sovereign long term bond interest rates.  The hyperinflation caused by these negative interest rates will result in hyper inflationary  growth of all asset class valuations. Those entities and individuals with first access to money and debt will be disproportionally advantaged in this Third Fractal progression.

This asset hyper-valuation progression (and periodic decay) will also occur in the simple  deterministic patterned mathematical fractal manner that represents the science of the asset-debt macroeconomic system.