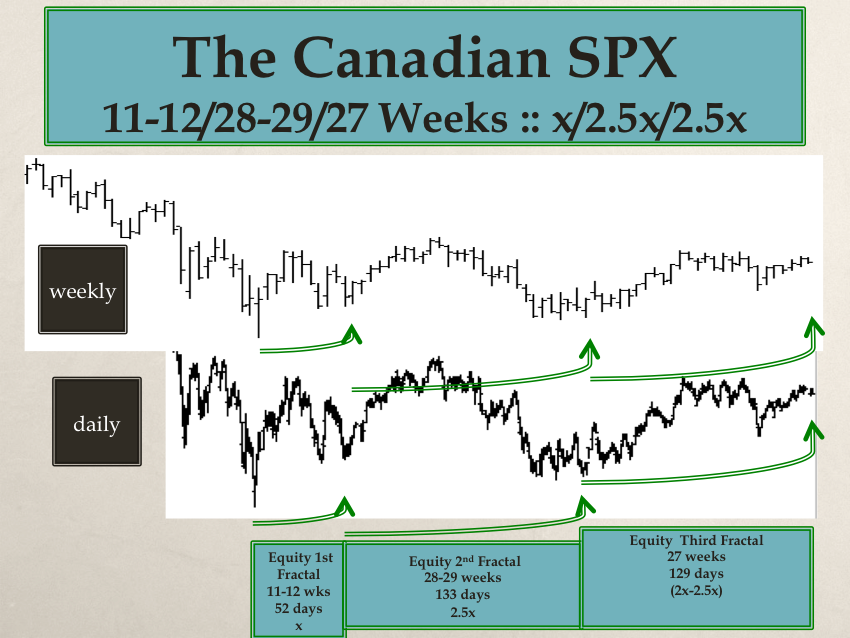 The evolving Canadian SPX, represents a tiny window into the global quadrillion dollar equivalent debt-asset system. Yet its individual equities are supported by a population of speculators who are influenced by the tax advantaged qualities of the equity class causing equities to proceed to their maximum x/2.5x/2.5x growth pattern.

This is a saturation nonlinear natural occurrence within the self assembly Asset-Debt Macroeconomic system.

Too much easy credit has been elaborated over 50 years. Too many assets have been produced. Too many assets have been overvalued.  In particular with leveraged tax laws and interest rates at 3-4 percent, equities valuations have been maintained to the system’s maximum x/2.5x/2.5x growth. And too much of the remaining potential new debtor population has been exhausted via  easy credit, historically low interest rates, and malinvestment entitlements such as >K12 education.

It is not the failure of the polarized congressmen representing ‘the haves’ verses those representing the majority of have nots to create a 2 January 2013 budget that is the precipitating cause the coming historical valuation decay.

Even with a continuation of current 2012 tax and spending parameters and QE3, this is the natural window of Macroeconomic Asset-Debt system’s asset valuation collapse.

This is the system time window for accumulated leveraged bad private debt elaborated by the Moneychangers, the Transgenerationally Wealthy Power Brokers, and Financial Industry to naturally undergo synchronous and reinforcing default.

The obfuscation caused by the artificial manufactured timing of the US fiscal cliff will provide cover for the Wall Street psychopaths, who are both the architects of the easy credit system and have a great understanding of the system’s natural cycles.

In this historical 1789 US equity-equity-progenitor 70/156 year :: x/2-2.5x asset crash devaluation, follow the money to see who profits from shorting and placing puts on the equity and commodity markets.

Even after the dust settles, the winner moneychangers and financial houses will use the artificially created fiscal cliff at the follow-the-money congressional hearings to blame congress and to intentionally obfuscate.

The 4 October 2011 growth in the Canadian SPX Equity Composite is a proxy for the quadrillion dollar asset debt system. The internal fractal self assembly progression is so elegant and remarkable, it will be studied for many years to come.
As an example compare its terminal May-Aug 2012 second fractal evolution and initiation of its third fractal with the self assembly initiation of the US SPX on 4 June 2011. 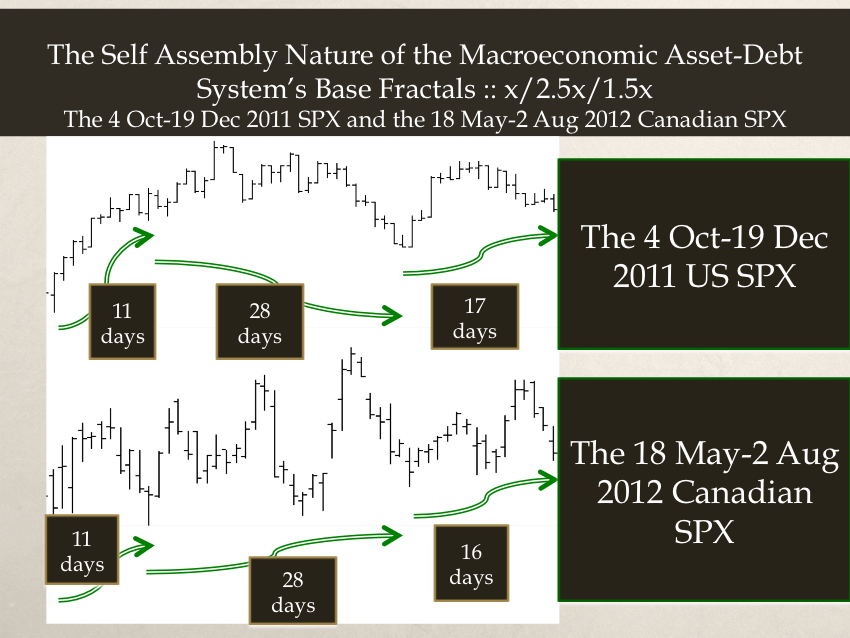 Note the characteristic gap between day 23 and 24 of the Canadian SPX 28 day second fractal. This nonlinearity characterizes the 2x-2.5x terminal portion of second fractals in the Asset Debt System. 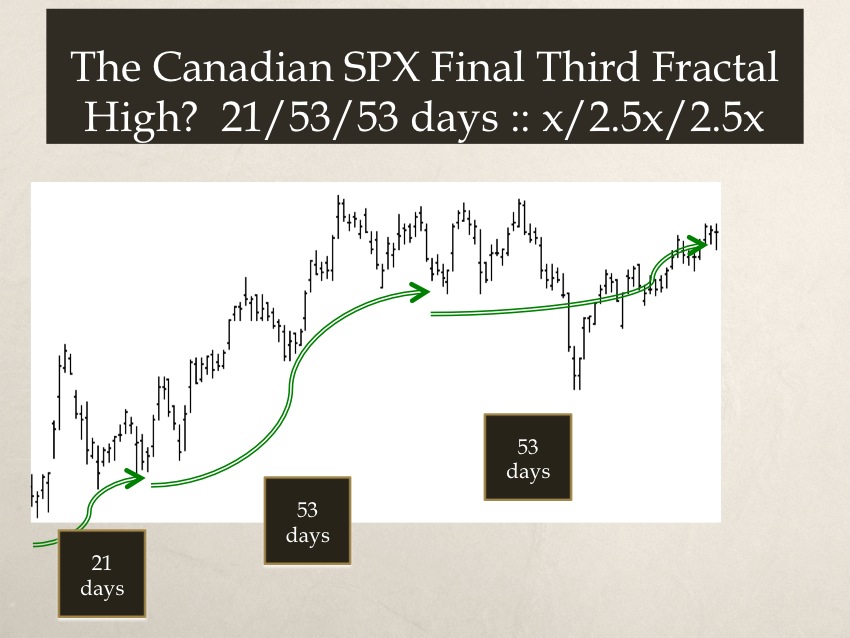 December 21 2011 is exactly at  the Macroeconomic Asset-Debt System’s Nonlinear Equity asset valuation devolution time area, the latter dependent on the underlying accumulation of of bad private, that is, while hidden to the public, at the point of inevitable and necessary massive and synchronous default.

It would be interesting to see exactly what interests proposed this specific time period for the US to have its impasse conflict resolution regarding tax revenue increases vice expenditure decreases. The Tea Party had its origins in Santelli’s Wall Street – perhaps that’s the money trail to this chosen time..

At any rate linear thinkers will attribute the Asset-Debt Macroeconomic system’s natural collapse – which is again inevitable and causally secondary to private  non sustainable debt accumulation and default collapse, asset overproduction, asset over valuation, and system depletion saturation of new debtor’s in a forward consumption based economy with historically low interest rates- linear thinkers will again  attribute the asset-debt system’s natural collapse to  its current political leaders. While politicians have been funded by and colluded with the Financial Industry and private Central Bank for the last 30 years, the principal beneficiaries and the cause of this greatest ever real economy dysequilibrium has been the Financial Industry.

What about US Debt Instruments, the Asset Debt System’s countervailing appreciation asset  during private debt default and asset valuation collapse? US debt  will see historical low interest rates in the coming weeks with gains for those holding US debt and for speculators in US debt futures.

The political timing of the current US fiscal cliff was  man-made.

But unlike the older conservative US  traditional banking practices, the 1990’s Nobel Prize winners’ new leveraged debt vehicles and complex derivatives of the Financial Industry have  distorted asset valuations and asset supply  in the asset-debt system to a historically unprecedented dysequilibrium state.

But in particular the reason for the Equity Composites self assembly to the maximum Asset Debt system saturation time extension ie x/2.5x/2.5x  timed with Asset-Debt system private debt default is precisely because of the legislated favored tax rules which were ultimately sponsored and paid for in political leverage  by the financial houses who directly benefit from the recipient trading activity.

At the foundation of the Asset Debt forward consumption based system, US citizen-consumers have suffered from the competition with global lower wages. This have undermined  the US citizen’s ability to maintain his relative inflation adjusted ability to acquire new debt and honor outstanding debt.

Too much debt has been produced by too easy of terms ultimately spawned by the basic greed of the Financial Houses; too much bad debt has been accumulated; too many malinvestments have been made, too many assets have been over produced, and asset prices are too  overvalued compared to the immediate and short  term borrowing capability of the US citizen.

Countervailing to US Equities, Commodity, and the illiquid real estate market, US Ten Year Notes began a blow-off on 18 December 2012 which will complete a 13 June 2007 13/33/23 of 26+ month fractal series with US Ten Year rates ending below 1 percent. 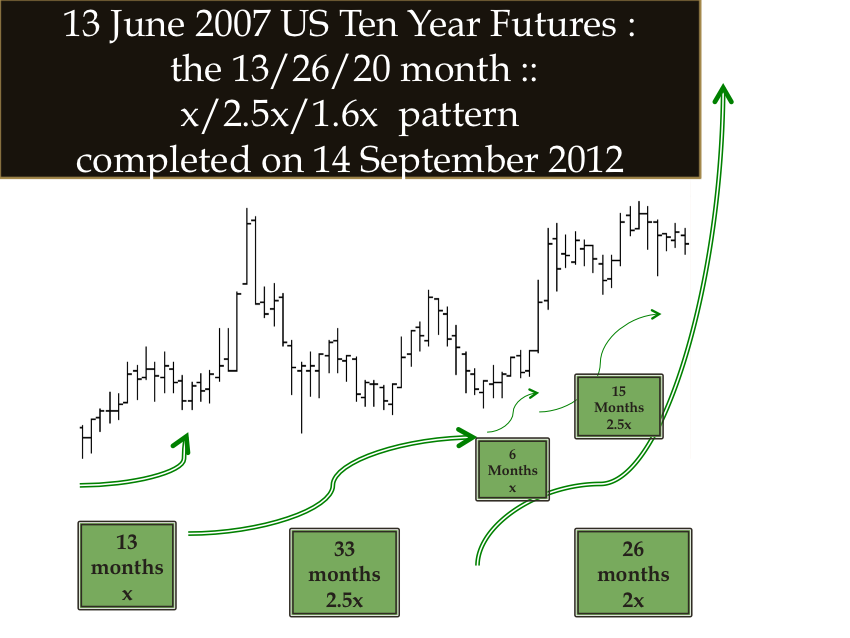 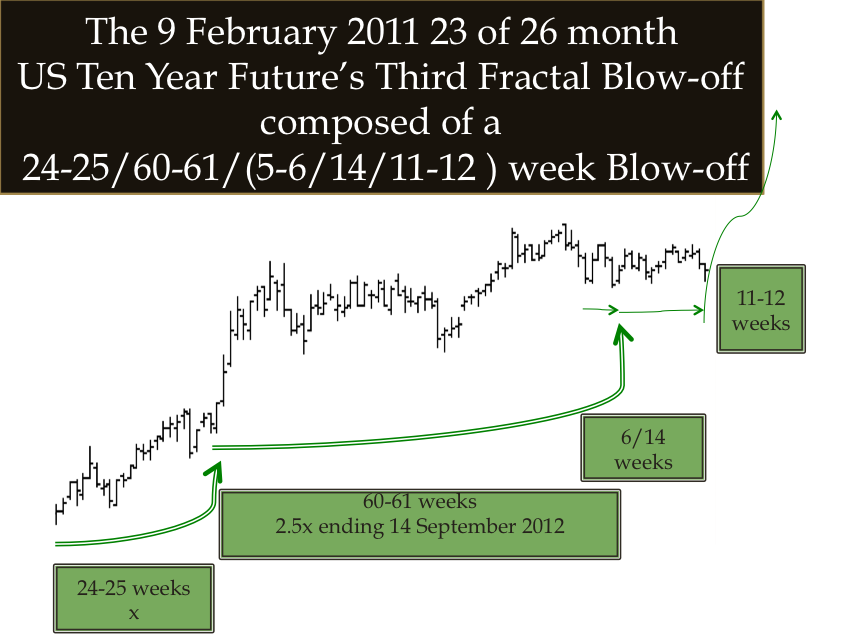 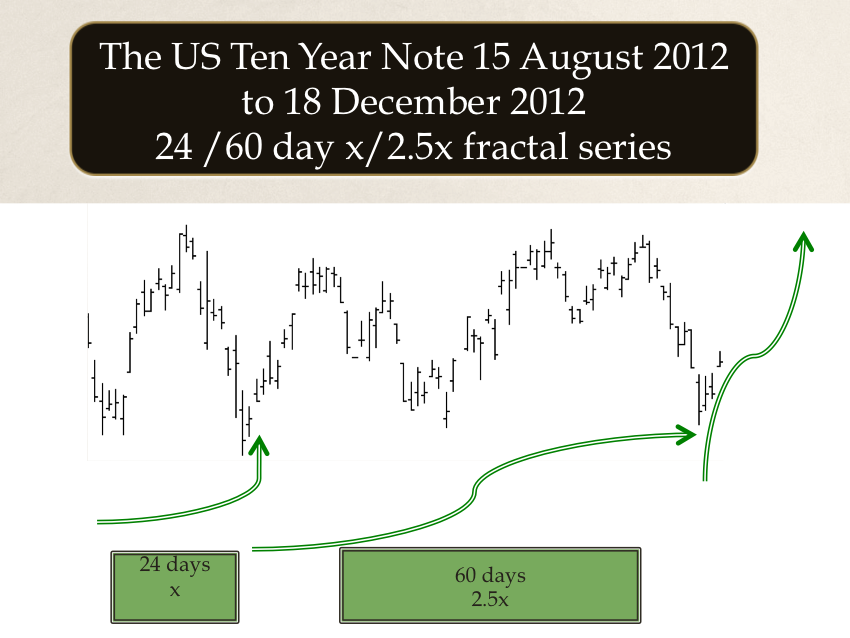 As goes the reciprocal of the Ten Year Futures TNX so goes City Bank  Corporation. 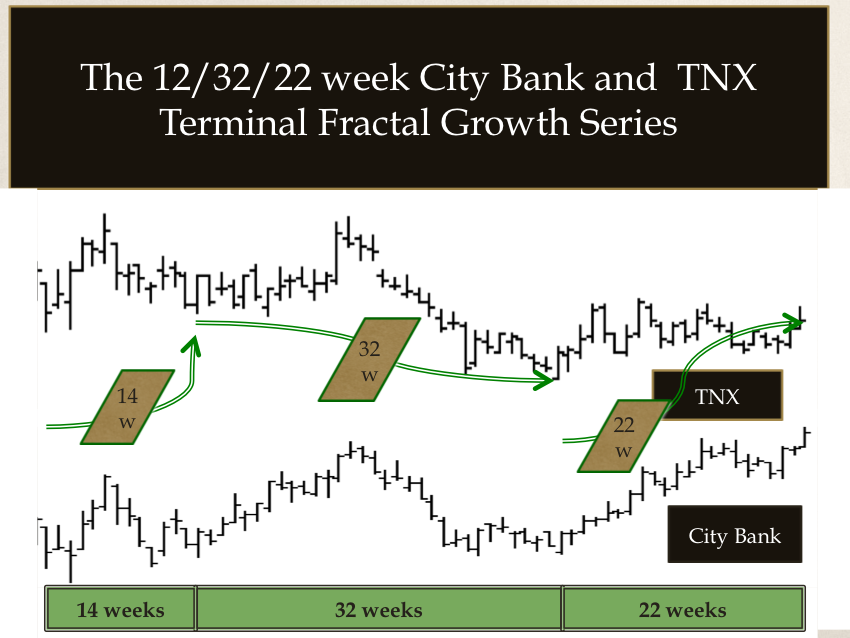 There is elegance and beauty to the quantum fractal self assembly of the countervailing Equity/Commodity class and the US hegemonic debt class.

Behind the countervailing asset class time dependent fractal evolution is the greater and greater accumulation of bad debt.

This is the Real Nonlinear Cliff of the Asset Debt Macroeconomic System.

The Asset-Debt System whose countervailing asset valuation curves evolve in a quantum  highly patterned fashion that confers on the Asset-Debt system the quality of a deterministic science, has at its rate limiting core bad debt.

Good debt is characterized  a down payment, an 8-12 percent interest rate to prevent excessive borrowing, and the a real assessment on the lenders part regarding the present and future  wherewithal of the debtor to repay.

Even with good debt, the system has natural points of saturation and decay.

With current tax laws so favoring speculation in the equity and commodity markets and so relatively punishing savers, a maximal x/2.5x/2.5x Equity extension  is natural point of Asset-Debt terminal growth and initial decay.

The height of  bad debt accumulation caused by  bad asset-debt system rules have created the monstrous dysequilibrium that is December 2012.

Searching the world’s absolutely-complete 57.6 inch thick 29,793 page fine print compendium tomb specifically dedicated to all known wrestling escapes moves, a fast search is made in the back of the massive book’s massive index for ‘pretzel hold escape moves’. Only two tiny words follow: the microscopic print barely visible with a magnifying glass … the first word has only four 4 letters: ‘n-o-n-e’ and the second word but 5 letters: ‘k-n-o-w-n.’

How escape the citizen-consumer-based forward-consumption based global one quadrillion Asset Debt Macroeconomic Saturation Pretzel Hold Area and … gently deflate the Asset-Debt System’s 80 years’ accumulated bad debt, asset oversupply, and asset overvaluation bubble – exponentially leveraged by and profited by the Financial Industry and by its Political legislative writing and passing Associates? How escape all of those pie in the sky entitlements that have won election after election and given the winning Congress members their own 20:1 :: congress to citizen entitlements?

Same answer as found on Index Page 29747 of the Master Wrestling Book of Escapes: ‘None Known’