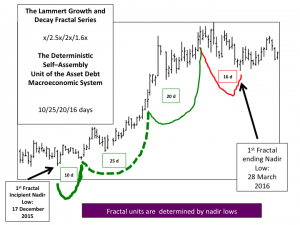 As the self-assembly Asset Debt Macroeconomic System deterministically and fractally …. self assembles; and measured growth and decay of Gold in US Dollars serve as another  Rosetta stone fractal  series inscription ( a sister to Google’s 2004 incipient 8/18/16/13 month fractal pattern) for an understanding of the greater system,  a tiny-time  fractal pattern of a 1000 years for the Global Macroeconomic  system evolves. Global? America is a country populated by immigrants from the the early Aleutian crossings, to the boat crossings, and finally the air crossings. America’s roots are global as is its interconnected future with its progenitors. The computer-based connectivity of human mathematical and scientific exploration and understanding of the universe is exponentiating … It is an awesome era  …..