Google’s base fractal sequence (x) starting in 2004 self assembled itself into a classic Lammert Fractal 4 phase growth and decay series lasting 18 quarters. (see graph below: 3/7/6/5 quarters =18 quarters) The maximum length of a second fractal series is 2.5 times the base sequence (x).  For Google with  a first fractal base sequence of 18 quarters, the maximum length of the second fractal is 45 quarters x/2.5x ::18/45 quarters.

In October 2019, Google entered the time period of its second fractal’s 45th quarter.  Google’s 45 quarter second fractal is composed of two sub fractals, the first of 13 quarters and the second of 33 quarters. This also is a x/2.5x sequence of 13/33 quarters.

From the face page of the 2005 Economic Fractalist:

The ideal growth fractal time sequence is X, 2.5X, 2X and 1.5-1.6X. The first two cycles include a saturation transitional point and decay process in the terminal portion of the cycles. A sudden nonlinear drop in the last 0.5x time period of the 2.5X is the hallmark of a second cycle and characterizes this most recognizable cycle.

The global asset debt macroeconomic system is elegantly quantifiable and deterministic in its intrinsic nature. Its assets grow in sequential fractal and sub fractal units  to their necessary maximum valuation saturation areas which underlying  debt expansion can produce with thereafter necessary devaluation in a Gompertz fractal manner. 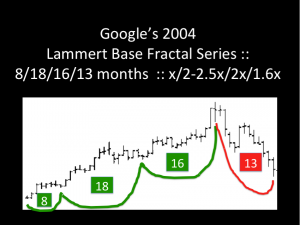